I completed my first Ironman this past Saturday and I couldn’t be happier. I am recovering well though definitely still feel sore 3 days post race. I loved reading race reports from others so I knew I would write one for this race. There was a rollercoaster of emotions leading up to this as it was initially canceled due to Hurricane Joaquin then miraculously rescheduled for 2 weeks later. Super impressive by WTC! Huge props! 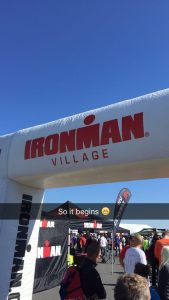 Why IMMD?
I chose this race for several factors. Number 1 being proximity. I live in Baltimore so the travel to the race venue would not be extensive. Number 2 being the flat course/familiarity. I am a bigger guy (started training at 195) and do not do well on hills. I am also familiar with the race site as I have raced Eagleman 70.3 x2. And lastly, time of year as I would have the entirety of Spring and Summer to train (dislike training during the winter).

Pre-race:
So this race I technically tapered twice. I was nervous because going into the initial race week I felt SUPER prepared and strong. I realize that 2 weeks shouldnt change much but I was feeling a bit more anxious that I lost fitness. In the end I think it made me do better. I woke up at 3:45am and ate my normal pre-race breakfast (just larger for ironman). 2 bagels with peanut butter and Nutella. 2 bananas. Large sport drink. I did some light stretching and gathered all my gear and headed out the door to the race site. I checked in my special needs bags, pumped my tires, ran through my bike gears, surveyed the entrances/exits, and calmed myself before race start. My sister was my sherpa for the day and she was AWESOME. So about 20 mins before scheduled swim start they make an announcement…the swim is being shortened to 1.2 miles due to 30mph winds. Before that announcement they noted that the air temp was in the 40’s and with wind chill it was in the 30’s. I was OK as I had one sweats still but was a bit nervous about the bike and run as I hadn’t trained much in cold weather. Anyways I was bummed about the swim but then they came back and said they were extending the swim to 3,000m or 1.9 miles. Still short of an official ironman distance but pretty close. All in all with courses being short, current aided swims, etc I wasn’t too worried about 800m of swimming preventing me from being a true ironman. The swim was the least of my worries anyways so I was still in great spirits. 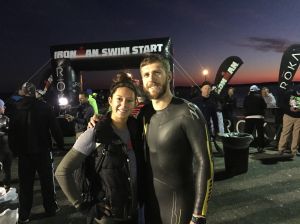 Sister And I before the first swim start

Swim: 59:17 (3000m) 1:58/100m
The swim was very pleasant. Water temp was 63 degrees and the wind had died down by the 7:30 delayed start. We had to do 2 loops of a new triangle course which was great bc it actually cut out an additional turn. I seeded myself in the 1:20-1:30 range which was on par with my training 2.4 mile swims. The first loop was very calm water wise. It was definitely crowded but nothing unbearable. I was kicked a few times but nothing crazy though about 2/3 through the first lap I look at my garmin and it was paused. Someone had hit my pause button! I was bummed but just restarted it and kept on trucking. The water felt very cold at first but I warmed up after the first 100m and felt great the rest of the time. The second loop the chop picked up a little. I may be a minority here but I dont mind chop…I almost find it like body surfing. My wetsuit kept me afloat so I was just kinda bobbing in the waves. I was making a conscious effort to follow people’s feet but I often found myself overtaking them. My new Zoot 3.0 full sleeved wetsuit was awesome and I felt so fast with barely any effort. My long swims in the pool were around 2:05/100m so the suit shaved about 7 seconds per 100m which is about on par with expectations.

T1: 10:12 (0.3 miles)
I had not planned a full change but I did have alot to do. The changing tent was full by the time I got there (I hear this is uncommon and the tent was small) so I changed outside in the cold. No biggie. I toweled off for a minute, threw on my tri top, arm warmers, cycling jersey, bike socks and shoes, and gloves. Then I had to run alllllll the way around to pick up my bike and then go through a long chute. Total T1 distance was 0.3 miles which at my Ironman marathon pace is 3 minutes of running. I heard that T1 times were inflated due to this. 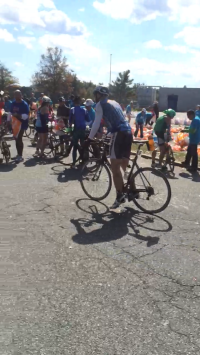 Biking out of Special Needs

Bike: 7:15:39 (112 miles) 15.43mph
The bike was windy. Nothing shocking here. I am admittedly a bit disappointed with my
time but it wasn’t too far off expectations. I obeyed my heart rate monitor like a zealot with my race plan to stay at the low end of my Aerobic Threshold (upper Friel Z1). For me that 129bpm. I almost hit this perfectly as I rarely rode over 135 and with my stops and some soft pedaling my heart rate dropped to the 110’s. I don’t have a power meter so I relied on heart rate and RPE mainly. I never felt like I was really pushing and in retrospect I probably could’ve cranked it a little more but I was focused on having a good marathon. I took the advice to heart that if I went too easy on the bike that I have 26 miles to make it up on the run. The main reason for my slowness besides the wind (which was expected) was I believe I over-hydrated. I had to stop and pee about 8 times on the course and my Garmin confirmed that I had ~15 minutes of total stoppage time. I was initially expecting a 6:45-7 hour bike split so those 15 mins are very clearly indicative of my final time. All in all the bike wasn’t too bad and my darkest spots were holding my pee between aid stations and a few huge gusts of wind. I felt very comfortable in the saddle. I struggled to maintain aero the whole time but I was happy with about 80% in aero. I have a road bike with clip on so I am not the most aero I could be. Next season I think I will spring for the tri bike.

T2: 10:29 (0.3 miles)
A little surprised at the higher time during T2. I guess I was a bit lazy. There were no bike catchers so I had to rack my bike and run around the whole transition again (0.3 miles). I changed my socks and my shirt (long sleeved). Left on arm warmers since it was still very windy. Not sure what else I did to contribute to a long T2 but alas I started out on the marathon…my first marathon ever might I add.

About to start my first marathon

Run: 4:53:04 (26.2 miles) 11:11/mile
So perhaps my darkest part of the whole ironman was seeing the mile 1 marker. I was pretty cold, my legs were pretty tight and I was worried about cramping, and I couldnt stop thinking about 25 more miles! Though shortly after this point my legs loosened up and I felt pretty damn good. My strategy was run/walk (9 mins running/1 min walking). This roughly equated to the aid stations but sometimes not exactly. I would add a 30 second walk through aid stations but still kept my 9/1 schedule. I probably averaged running 10 min mile pace. The first loop was the worst as you see all these folks so much further along and you are pretty tired already but after that first one I was cruising. I barely remember the second loop and the third loop was pure adrenaline. Finishing was awesome and I was pretty sore immediately after but on two feet and no cramping!

Takeaways: For my first iron distance race I was very happy with my finish time. If the swim wasn’t shortened I still would’ve finished under 14 hours so still feel great about my time. I know some places I could improve from just a pacing standpoint but overall I think I even paced it pretty well. At no point did I have any nutrition problems so that was a huge plus. Chicken broth is my new best friend FYI.